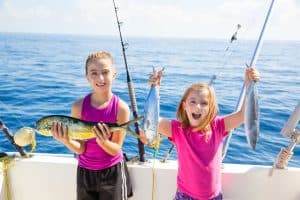 As you venture beyond the barrier reef, the waters drop off quick to depths of 2,500ft, making this tropical paradise an ideal location for deep sea fishing. It only takes 30 minutes for us to reach great deep sea fishing grounds, allowing you to maximize on your fishing time. This also means you can easily incorporate this experience with other fun activities that we offer, such as Stingray City or Snorkeling.

Climb aboard one of our charter boats and our experienced captains will take you on a thrilling adventure to catch some big- game fish! Don’t know how to fish? No problem, our well-trained crew will show you the ropes and be sure to help you every step of the way.

Our 38’ Egg Harbor is the perfect vessel for great deep seas fishing in the Cayman Islands. Book a half-day boat charter to go reef fishing for Jacks, Snapper, Grouper and many other species or get a taste of deep sea fishing for the larger catches. For those true fishing enthusiasts, booking a full day fishing charter is a great option as you can go further out to 12-mile banks where Wahoo, Tuna, Mahi Mahi and Marlin are famously in abundance. Our charter boats are fully stocked with all the gear and equipment you’ll need, just ask, and we’ll get the beers for you too!

Types of offshore fish you find in the Cayman Islands

Also known as Dorado, Dolphin or dolphin-fish; these 3 to 25 pounder flat fish are quick and lithe, sometimes taking off out of the water when hooked. They are fast breeders and tend to hunt in pairs with schools usually lurking under any form of underwater debris.

Also referred to as the Allison Tuna or Backache, the yellow fin is a most flamboyant fish typically weighing anywhere from 30 to 70 pounds. Available abundantly in the tropics, they are hardy when snared and will test your fishing skills to the limit. Tuna makes a great meal and have both commercial and sport value. Yellow fins can grow up to 8 pounds in a year and can grow to be massive weighing over 140 pounds in four years.

The smallest of the tuna species, Black Fins weigh up to 15 pounds and are around 25 inches in length. They do not live longer than 5 years. These tropical fish are abundant on the reef and offshore the Caymans. Here there are plenty of shrimp and crab to feed on, they also hunt surface and deep water squid.

The common barracuda or simply ‘Cuda’ can reach up to 6 feet long and is prolific in the waters over the Cayman reef. A notorious bait thief, the barracuda is not afraid to take bait even when the rest are wary, making it one of the most readily available on a Cayman Islands deep sea fishing expedition.

The Blue Marlin is the superstar of game fish; made internationally famous by Hemingway and having lived up to that fame. It’s appearance is vivacious and speaks of speed and strength; putting on awe inspiring displays with jumps and dives when baited.

The Wahoo is prized as a gourmet game fish because of its high quality meat and fast speed. Caught by trawling, they are found in either solitary or in schools of a few or a couple of hundred. Due to its availability close to shore, the Wahoo is a favourite of many sport fishermen who prefer their light to medium tackle.

The King Mackerel is migratory. They are a medium sized catch and are typically 30 pounds but have been found to exceed 90 pounds. Typically, King Mackerel occurr in depths of 40 to 150 feet though larger ones will venture closer to shore. The mackerel is a carnivore preying on squid, jacks, cutlass fish and blue runners. 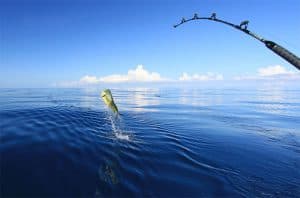 In Grand Cayman, you can enjoy deep sea fishing all year round due to the consistently warm weather and waters.

January is the month to battle Wahoo offshore; they are still young and agile so get ready for a chase. By February however the Wahoo have become offshore monsters and the Mahi Mahi are beginning to tug at the bait. In March the Wahoo offshore have mastered the game with Mahi Mahi no longer juveniles. There are also Great Barracuda with sightings of Sailfish and Sword Fish in true Caribbean colours.

April brings more Mahi Mahi while May is Nassau Grouper season. June is by far the biggest fishing month in the Cayman Islands with Blue and White Marlin, Tuna and Mahi Mahi caught abundantly. The blue waters are overrun with Tarpon and Bonefish by the time July rolls in. Yellow Fin Tuna join the Mahi Mahi with the Tarpon, Bonefish, Permit, Pompano, Snapper Grouper, Triggerfish and many more.

In August, Marlin start becoming scarce but the Yellow and Black Fin Tuna open up. Mahi Mahi are the main deep sea game fish with a scattering of bonefish in the wades. By September, Black Fin and Yellow Fin Tuna, Skipjack, Mackerel and Barracuda are found in the richer fields which continue in October where there is a very decent number fish for deep sea fishing in the Cayman Islands.

In November, the first Wahoo of the new season start to show up and offshore Skipjacks are plenty. December is usually cold in temperate regions but the Cayman Islands have a variety of big fish, warm seas and soft sands. 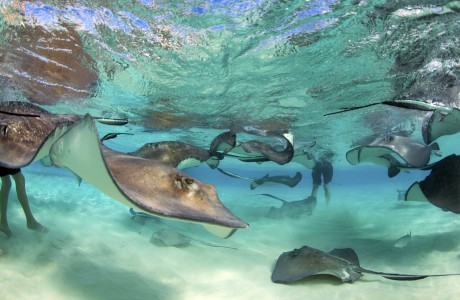 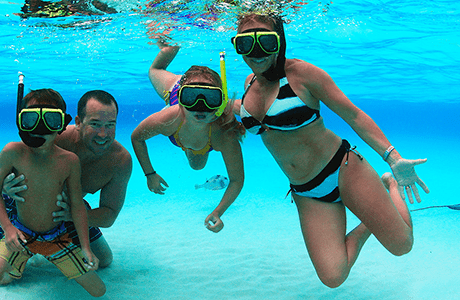 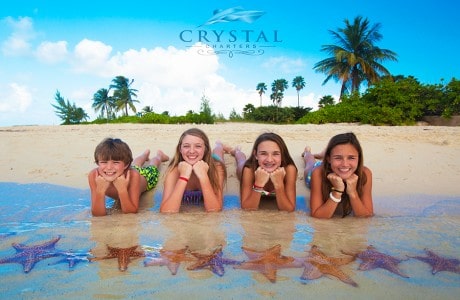 Hang out with our friendl... 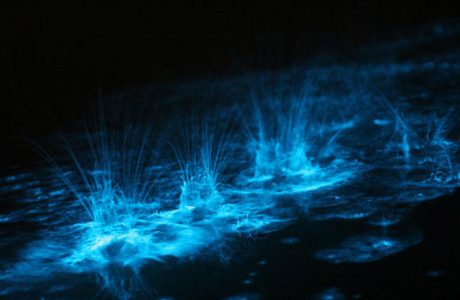 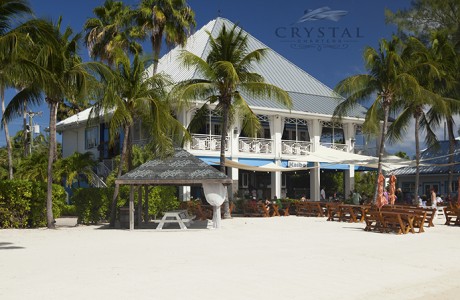 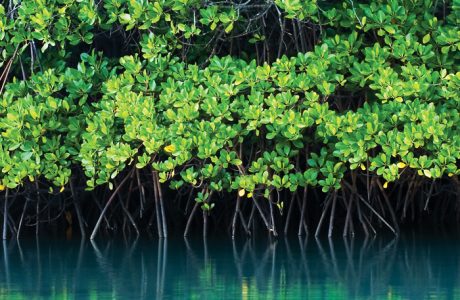 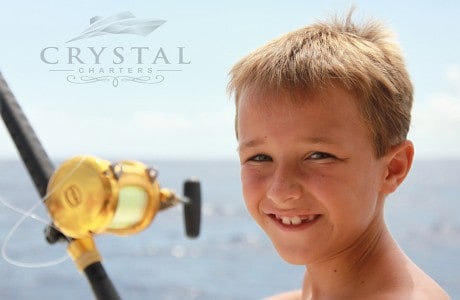 Deep Sea Fishing in the C... 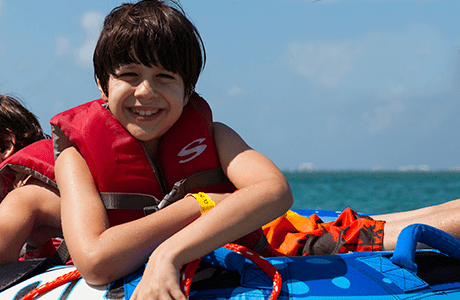 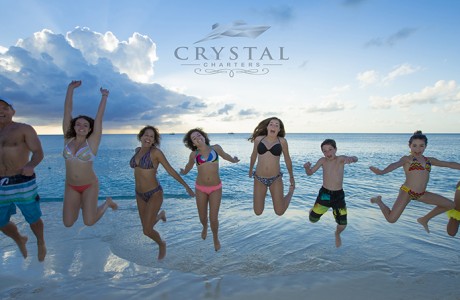 Our photographers will ca... 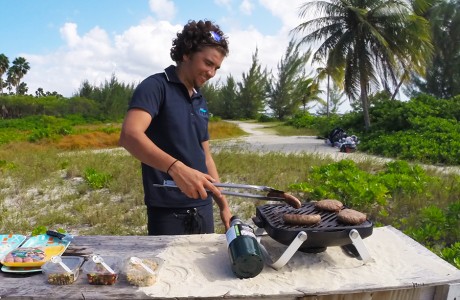 BBQ on the Beach with our... 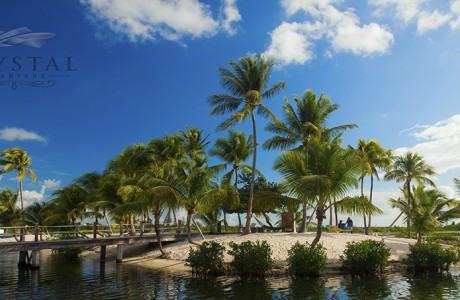 Crystal Charters Cayman
5.0
Based on 100+ reviews
See all reviewsWrite a review

Kari Bohl
00:41 15 Jan 20
Nothing short of perfect! Kristie was so helpful in booking our boat ride. Cass and Alex were so much fun we didn't want the day to end! Thank you for a truly memorable day!

Lauren Robinson
23:40 08 Jan 20
Crystal Charters provided my family with a beautiful and memorable experience. The staff was beyond knowledgeable and went out of their way to make our children’s time on the boat magical. They... even worked with our son to reel in a fish. We were not only shown amazing sights, but Vernon and Serena knew everything there was to know about the sea life and the best spots for viewing them. We would highly recommend Crystal Charters.read more

Christina Larson
14:41 31 Dec 19
We had an amazing day with Crystal Charters. Captain Benji and Cass were fabulous! We went to a reef to snorkel, starfish point and to Sting Ray city. They were so educational and hands on with... us during this excursion. I cannot recommend this charter enough. We will be using them again in our next adventure in Grand Cayman when that happens. Thanks for a great day on the boat!read more

Rachel Espinosa
21:22 09 Dec 19
We had an AMAZING trip with Crystal Charters!!!! The two captains we had, Matthew and Hunter, were very professional and patient with our group. They made sure that we were able to do all of the... things we wanted to and were very helpful with the stingrays and snorkeling. The booking process was very smooth as well. We were on the WorldCat boat and it was gorgeous - incredibly clean and comfortable. We had six in our group but could easily have had a few more and still been comfortable. I would highly recommend Crystal Charters!!! You will not regret it, our entire group said it was the best six hours we spent on the island!read more

Brittany Barton
22:46 25 Nov 19
What an amazing day! We decided to book a 4 hour charter while on the Disney Wonder to avoid the typical excursion crowds and couldn't have been happier! Alex and Kass were exceptional guides and... made the most of every minute we were there. The time we spent with the stingrays was awesome. Most of the tour boats had 50-100 passengers, all waiting to see the rays with their guides while Alex and Kass just kept finding more stingrays to bring over to the four of us. Then, while snorkeling, there was only one other small boat nearby. Kass went the extra mile entertaining our youngest daughter on the back of the boat by feeding the fish and finding conchs once she tired of snorkeling. I would recommend Crystal Charters to anyone going to Grand Cayman and we'll be using them again in the future!read more

Tom Hurlbut
00:28 22 Nov 19
Captain Benjie and crew, Shirley and Alex, were knowledgeable and went above and beyond to make sure our trip was everything we could have hoped for. The boat was comfortable, the snorkeling was... beautiful and the visit to stingray city was superb. Definitely do the bioluminescent bay experience too...amazing! We had such a good time with them, we chartered the next day to try some fishing. While we didn’t catch any record-breakers, the day on the water with their hospitality and knowledge was everything we could gave asked for! Many thanks for the great experiences and we hope to see you again!read more